Heart of the Wolf
Terry Spear 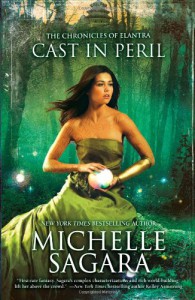 I love this series. Michelle Sagara West's ability to create multi-faceted characters with complex motivations amazes me. The "good guys" are constantly making tough decisions, sometimes forced to focus on the bigger picture rather than any individual or on saving what/who they value most. The tension between the Barrani Consort and Kaylin is a perfect example of this. The Consort is still reluctant to forgive Kaylin's willingness to risk destruction of the entire world for a few refugees. [Cast in Chaos] The Consort's focus is on the safety of her people and she's justified in her anger. At the same time, Kaylin is a healer and a protector, she made the only decision she could live with. Forced to spend time together on the journey to the West March, Kaylin hopes they can eventually rebuild their previous relationship.

Kaylin & Severin's relationship is also strengthening, albeit slowly. She had a hard time moving past his previous actions and accepting exactly how much value he placed on her life was beyond her at first. Now that she's let go of her anger and desire for revenge, other issues still prevent her from pursuing any kind of intimate relationship. I wasn't really pro-Severin in the beginning, but I am interested to see where this leads.

Which brings me to Lord Nightshade. I admit I usually lean toward the "bad boy" in romance novels. You know, the one who comes to value the heroine and really care about her. I never thought this would come from me, but Lord Nightshade is never going to be the one for Kaylin. I've had a sneaking suspicion for the last couple books and now I finally get it. He will never value what she holds dear. The fact that he could and did sell humans from his fief, not knowing their ultimate fate ... that was the moment that made the point clear.

I was happy to learn some of Teela's back story and am looking forward to even more in the next book. The continuing story arc featuring the Exchequer embezzlement is discussed a lot without revealing many more details. Since most of the book takes place during the trip and outside of the city, appearances from a few of my favorite characters are at a minimum. The Hallione are introduced and make an interesting addition to the story.

West's books aren't light reading. She paints wonderful worlds with her words, but there are a lot of details. I personally love the way she explores the power of names and true words, the basic differences between immortals and mortals in regards to those names and the part words played in creating the various races. I'm definitely looking forward to the next book in this series.
Tweet